This series of landscapes commemorating the hills of Tuscany is most notable for the peculiar dynamics acted out by the trees. The artist achieves a powerful sense of movement through complex linear winding, but not only: almost every trunk, and sometimes branch, begins with one color but ends with another. The juxtaposition of hues, as well as directions of the main lines describing the trees, produces an effect of constant movement and change — and conflict. I think that the mobility of the growth is unusual and high enough as to mark it as the protagonist, an almost living character in the series. (I am not very fond of such formulaic conclusions, where the plot, or some other structural element is assigned the role of the principal actor, even though allegorically, but this time the comparison seems more than justified.) 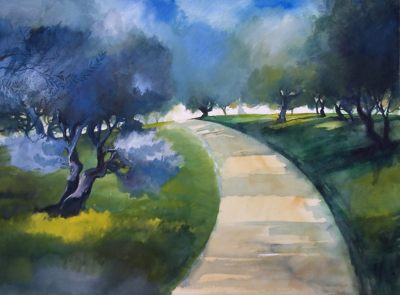 It is evident that the artist experiments with mediums, on the conceptual level, trying to figure out which befits most each and every season of the year. Though watercolor holds the stage, gouache plays an important second part, showing — or showing off — astonishing detail and depth and an oddly opaque iridescence of coloring, sometimes transcending to volume and space “swelling,” which endows the painted surface with a phantasmagoric dimension. It seems that gouache suits winter and autumn best (considering the artist’s style), excelling in reproducing the effects of subdued and diffused light. This is the first time I encounter professional gouache artwork, and I certainly hope not the last. 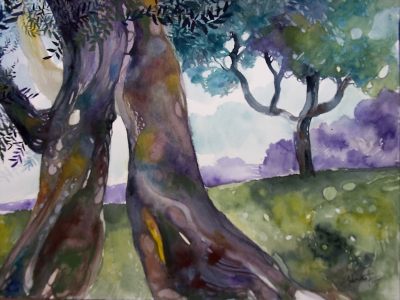 The watercolors may at times seem unpredictable, and bubbly, in the most literal meaning of the word. The two purple paintings include bubbles in various forms, some reminding of defects appearing on old black and white films and daguerreotypes — here we are, back to photography again. Anyhow, either small or big, they conjure the ghosts of pointillism, but with an original twist. The final result amounts to several layers of color being superimposed, once again contributing to depth and varied rendering of space. In simple words, I think that what makes these paintings so interesting is that yes, we can look at the trees, — but we can also look between them. 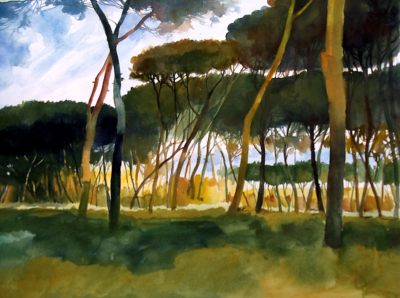 Though the artist’s original intention was to depict the hills in various seasons during the course of one year, he appears to have leaped back to much more distant eras. Some of the trees bear a resemblance to mesozoic tree-ferns. If it weren’t for the path dissecting the ground in one of the pieces, the illusion of ancient wilderness would have been perfect. But perhaps the artist was aware of that quality: the exotic viewing angles, and compositions involving close ups and panoramic views shake the onlooker up, in a very primitive (basic) and violent way, prompting associations with the dawn of civilization and the beginning of life on our planet. And thus, the series as a whole work as a kind of a force of nature — and, most of all, — of human nature. 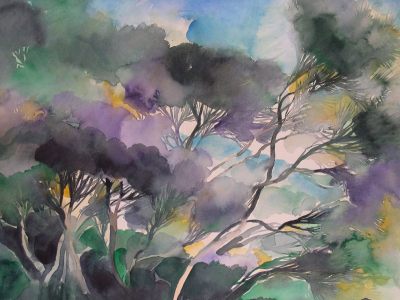