Alessandro Andreuccetti is an Italian painter and illustrator who employs acrylic paint, water-color, gouache and ink in his work, displayed on his website and blog. Some of his pieces careen towards the avant-guard, exhibiting conceptual and surreal qualities, but most of his artistic output is situated within the traditional framework of landscape, cityscape and people representation, where he strives to express himself in “new perfectly independent compositions.” In my opinion, he achieved his goal at least from one aspect: the illusion of space and volume, and in this review I would like to focus on how these features stand out in his haunting land and cityscapes. 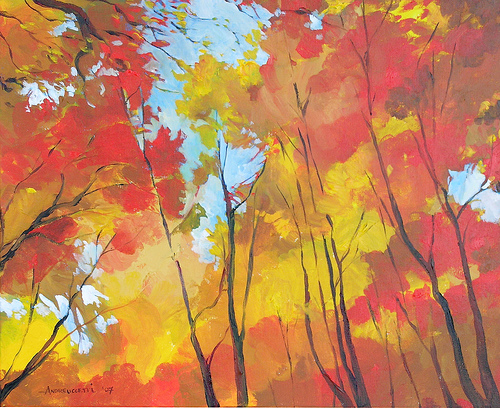 The artist’s creative approach to the empty areas on the surface he works with paradoxically enhances the perception of volume and space in the beholder’s mind’s eye. He concocts an engaging interplay between active and passive zones — and I particularly like the idea of selective passivity, where the nearly blank, discolored parts play a crucial role in enlivening the darker and apparently more substantial regions. This combination reminds me somehow of the negatives we see in photography, and, after a more careful examination, there is indeed something of the photographic negative in these landscapes. As a result, his artwork may be viewed with a double standard — but in the best possible meaning of the phrase. 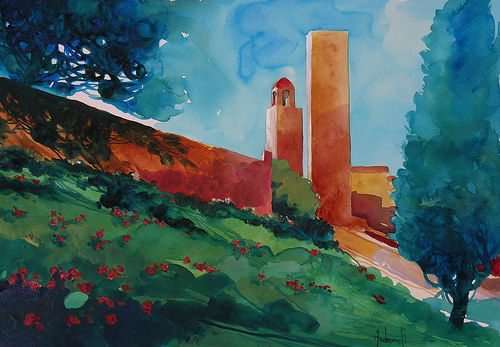 Consequently, the spring lightweight florals, the denser groves and the concrete structures, they all exhibit a reassuring sense of style and its technical opposite. Moreover, the artist even-handedly combines these themes, placing dainty buds near formidable buildings or deep inside wide landscapes. Slopes and curves, either imaginary or real, further emphasize the sense of space, particularly pastoral — even the cityscapes appear to be stifled by the approaching growth; perhaps this is why the buildings look so abandoned. On the other hand, the inhabitants might just have gone outside to enjoy the flora, and understandably so. 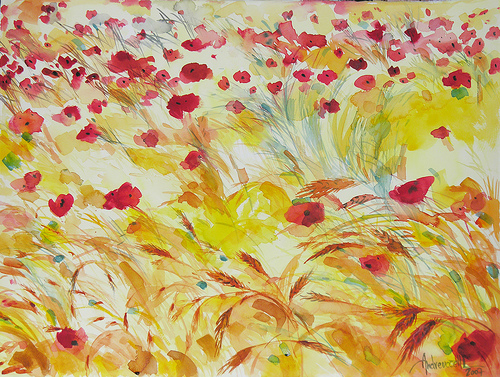 To reiterate, the artist demonstrates adroit utilization and deep understanding of space, to the point of ability to manipulate it: to play and toy with it. He offers breathtaking vistas with an easy hand, and with an almost ironic, and somehow wise touch. He doesn’t tackle the theme, but rather approaches it carefully and assuredly, as if space itself were a frightened and alert wild antelope; he nets it with his brush and the concept behind it. The painter’s style impresses with both lightness and compositional range and solidity: he is a universal artist not only because of the multiple media he works with, but due to what he achieves with it as well. 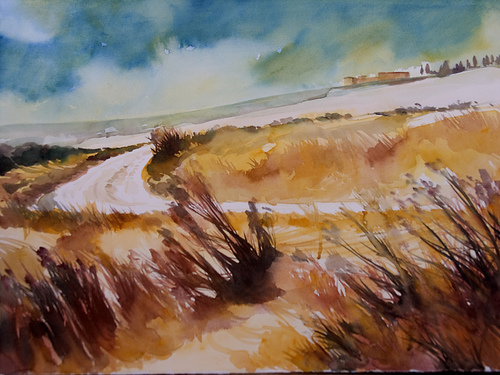