These contemplative pieces conjoin portraits with detailed scenery into felicitous combinations. Compositional harmony transcends into an atmospheric psychic quality, where calm and confidence interlock and create tight and streamlined mental images of peace, and faith into what the future portends. We directly witness the artist’s interest in subtle psychological exploration, covert in still life due to the absence of human subjects. In some ways, people from the audience were the “models” for the florals, literally subjected to strong light effects; here the artist abandons drastic contrasts to make room for the children, and draw some general conclusions from the way they blend with their surroundings. 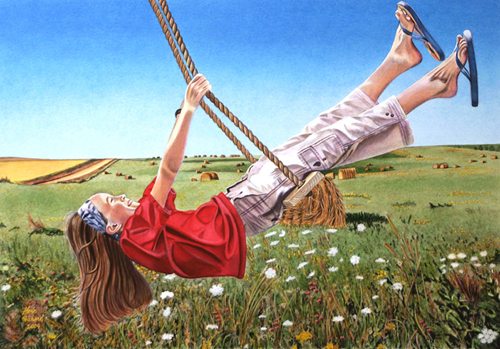 Motion is the underlying theme of these paintings. All three incorporate a kind of a vehicle: a car, a bicycle or a swing, which may be viewed as a vehicle for having fun, deftly utilized by the girl. Wheels, though out of the frame, allow for the movement. The swing may theoretically describe a full circle, but it seems as though the girl would rather catapult herself into the air. Safety precautions — seat belts, a helmet a the girl’s grip reassure the worried parent in the viewer. The children are positioned to experience the primitive pleasure of fast movement, some with the comfortable padding modern civilization and technology provide. The artist, on the other hand, takes the role of the observer of their reactions. 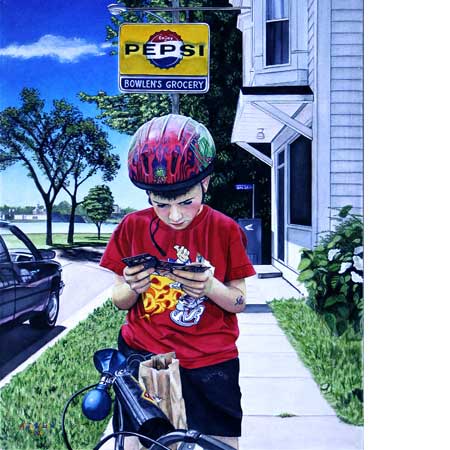 The artist studies their responses with an approach that mixes anthropological interest with empathy. He strives to find the right proportion, as being too scientific and detached may translate into cold interpretations whereas too endearing rendering may be just as repellent for its sentimentality. To my mind, he finds his golden ratio in the context of these paintings as a series. Levels of sophistication — from a simple swing, towards a mechanical apparatus and concluding with a car explain the increasing disaffection imprinted on the protagonist’s faces. The pleasure of spontaneity gives way to discontent with artificial jerky progression; movement evolves, and so does the psychological reaction. 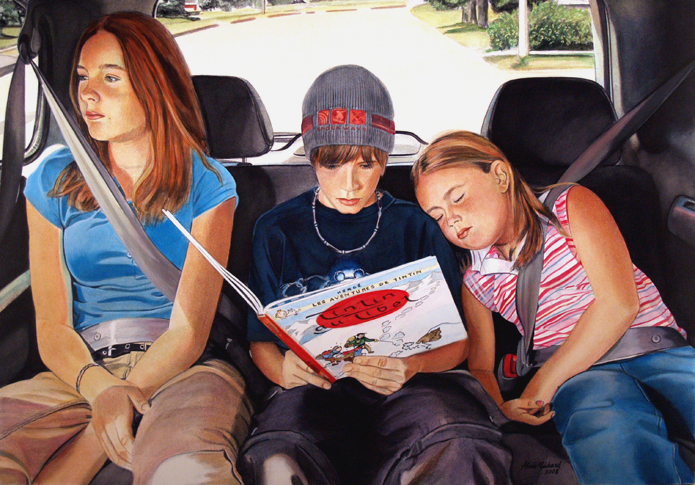 The teenage girl, trapped in the car and bridled by the belt sits with a sour face, looking out of the window as if with a quiet rebuke. The boy rests upon his bike in an uncomfortable posture while the swinging girl enjoys herself to the full. The artist follows his subjects and creates a series that convey the short history of human civilization. I find the idea not only entertaining, but also inspirational. Have you unlearned to enjoy life? Look at the laughing girl and her effortless balance, and learn again! Do you cherish some ideals no longer relevant, like Christopher McCandless did? Drive a car for a while, and don’t forget to put on your seat belt. Ride a bicycle if you are somewhere in between… and it’s good for your legs too.