Often the message of a commercial advertisement contains a fundamental truth — people wouldn’t be tempted to consume advertised products if it wasn’t so. We may feel uneasy about the intermarriage of commercialism with our lives, with being tagged as “target audience” and so on but then, our lifestyle depends on it. Deprecation of consumerism in prosperous nations has long ago turned into righteous blathering lacking any real plan in dealing with the phenomenon. What we need, I believe, is a proactive reflection and actions that interpret and study the trend, not words. Alvin Richard does his part by examining how that basic human urge to seek pleasure and enjoyment, mixed with the secret Coca-Cola ingredients, stands the test of his brush.

At the first glance we see a remarkable replication of the bottles and the insignia; it acknowledges the advertisement’s power, not without some admiration, and in a way pays tribute to the corporation, at least for the mere courtesy of providing a painting theme. At this stage the idea of business holds its ground, and the paintings may be seen as an exceptionally artistic extension of the commercials. However, after a more careful viewing we notice how pure aesthetic begins to overpower its source; gradually visual effects overshadow the written message. It collides with an iceberg of reflected light and sinks in an ocean of sparkles, to lay forlorn on a seabed of bright red. A Titanic indeed. 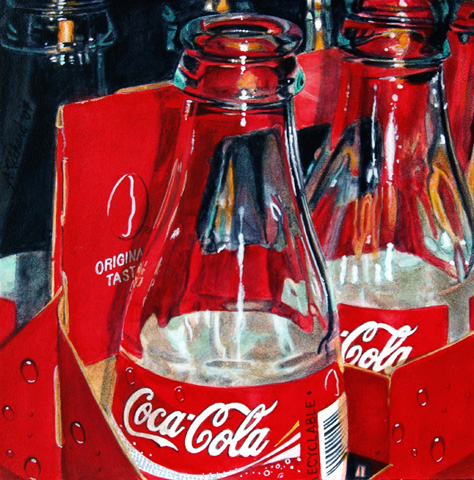 Eventually the artist reinforces the boundary between the natural experience of aesthetic appreciation and its artificial commercial exploitation, no matter how sophisticated. Where business blurs, art distinguishes. On a different note, I find that these pieces hold the potential to explode, just like a coca-cola bottle opened after a few shakes. During the two stages the artist shakes ideas, only to show how incompatible (like the red sign near the piece of sky) they can be. In a somewhat ironical finish, he directs the paintings at the viewer, contradictory to the instructions for use usually printed on the bottles’ label. Art, unlike carbonated beverages, explodes only metaphorically.

On the other hand, this is not a call for revolution, but a careful, even stoic study of the current state of events. By his creative effort the artist repackages commercial ideas and presents them to the public again, but on his own terms. He doesn’t offer false hope, reveling in the idea of regaining lost innocence — and there is nothing sarcastic about these paintings. Rather, he buoys the issue with a reserved attitude and gently reminds us that just as the pleasure derived from watching still life can transcend the subject, the pleasure of life can overcome any commercial purpose that tries to abduct it.