This is a true series: a single theme recurring with slight variations over and over again. Minuscule changes in composition and palette assume a generalized contextual significance of an incremental accumulation that transmutes the initial theme into something beyond its original self — a meta-narrative of a sort, albeit visual. It may refer to memory or even some psychological interpretation of the slope versus two trees configuration: a young couple making it against all odds, for example. Two friends withstanding ostracism and arising tall above some prejudice, and so on and so forth. The cloud in the background may serve as an example figure these imaginary characters try to emulate. But there is a more to this resemblance than just imaginary imitation. 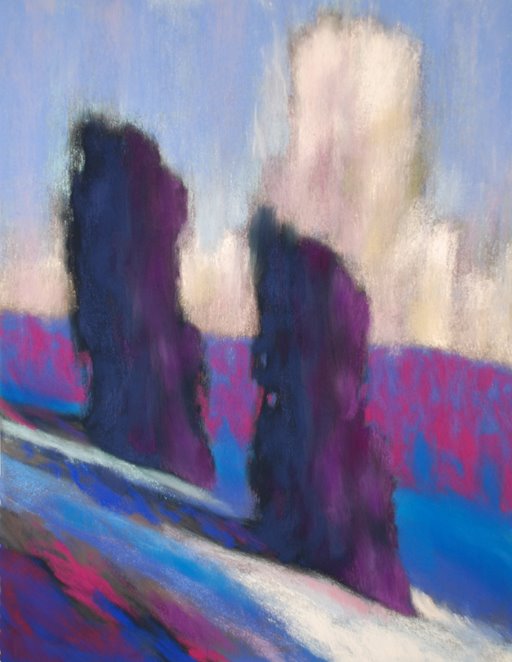 I once watched a television show about Machu Picchu, “The Lost City of the Incas,” a breathtaking architectural monument that may be seen as one commemorating an entire civilization. Although the host of the show was an anthropologist, or a historian — not an art historian — most vividly I remember the part when he was describing and showing some of the artistic achievements of the once prosperous inhabitants of the city. He stood on an edge of a cliff, with various stones and formations surrounding him, asking the viewers to take a closer look at them. I didn’t notice anything until he pointed at it directly: the stones were replicating the skyline created by the mountains far ahead and below. 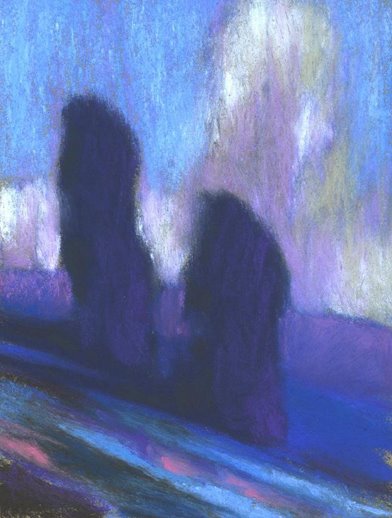 He went on saying that the pattern on the cliff is not incidental and that the stones were intentionally shaped to repeat those distant outlines. As your host for today’s Art & Critique show, I would like to draw your attention to the trees performing exactly the same trick. All there is to adjust is the medium of expression and the objects used for it. From three dimensional realm the artist turns to two dimensional rendering, and, perhaps accordingly, instead of solid immovable objects such as stones and mountains he depicts transient and unstable trees and clouds. 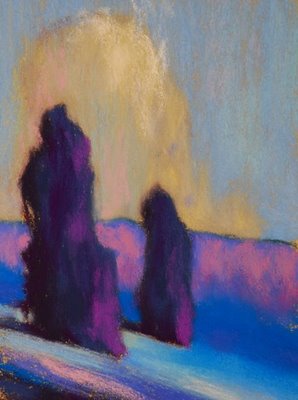 I think that the compositional correlation underlies the whole series and gives it that meta-narrative quality — though purely visual and, considering the infinite number of available viewings and readings, also abstract. So in a way, what happens here is the abstracting of the abstract (the rough shapes of the trees and clouds) — a twist with a strong postmodernist overtone — of a somewhat decadent flavor. And now we enter the (even more) speculative and theoretical part of our show — this is exactly the kind of decadence that supposedly led to the demise of the great Inca civilization. While each painting emulates the remote art of Machu Picchu, Casey Klahn’s pictorial series may refer, even if metaphorically, to our own “nearing end.”

One Response to “Casey Klahn: Trees and Clouds, Transient Monuments”