Ascender’s collages present liquid and mystical, often downright unreal surrealism (I know how strange that sounds) with consistently incorporated urban insignia and allusions. It would probably be correct to say that the latter is organized in the manner of the former — and so the artist may be communicating her take on modern life, proponing both chaos and hierarchy. Ascender composes an original visual idiom when intermixing those. Because the art form included contemporary icons and symbols from its inception, composition and organization have taken on extra creative value — and the artist discovered her own language while maximally exploiting it. The result is a series of captivating works of art. 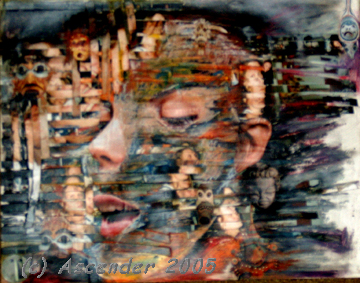 Universally captivating, I should say. I learned from the Discovery Channel that human brains are programmed to recognize faces, that there is a specific part of our brain designed just for that particular task. I could not say if Jacquelyn Berl watched the same show, I could guess that she didn’t, but her collages show an intuitive understanding of that concept nevertheless. There are faces, mostly female and attractive, that constitute the visual framework of the each piece. The viewer is being lured into the world of a particular collage by a scientific proxy, only later to realize that the temptress has a particular artistic meaning. Well, that’s not surprising. Artist are always one step ahead of the scientists, no matter what the latter might claim. 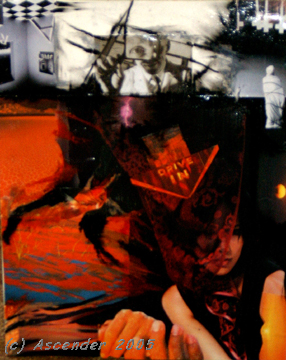 The generally monochromatic backgrounds, either cool and dark, or hot red instill a hypnotizing and relaxing, maybe even a drugging effect. The light, (though scarce) appropriately blurry and milky, concentrates on the edges, as an afterglow. Additional recurring motifs include masks and religious sculptural inlays. The sum of these elements creates a whirlwind of subconscious impacts, most of which, I personally find difficult to isolate and define — and this is the part of the appeal of the viewing and interpreting experience. It’s like taking a plunge into an oozy river, or, just sticking one’s toes in it — depending on the viewers’ commitment. 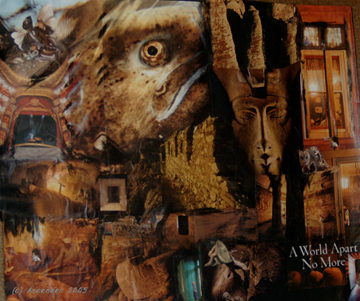 However, I think that the two mentioned basic qualities, though mixed, remain easily identifiable, reminding of the duality and the edge of our condition: we dwell in socially and physically (architecturally) structured environment, yet host ghosts, prejudice and anxiety in our psyches, and homes. Personally I find relief in such acknowledgment of the human condition. “Life is complicated,” the collages imply, and one cannot but agree. Once again I drift towards social commentary, but perhaps this is the most appropriate place for one — there are people and houses — all the prerequisites of what we know as “society.”