Rick Nilson is a genre painter working with oils, which he applies on canvases or panels reaching between 10-20 inches (50 centimeters) in height and a similar range in width. His subject matter usually involves his place of residence: Kitty Hawk, North Carolina – a small coastal town located on the Outer Banks.
Rick Nilson exhibits his work on his blog, as well as several local and online galleries. This review focuses on the artist’s depictions of different birds and marine animals. 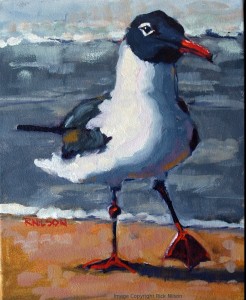 Rick Nilson’s fauna paintings register psychological nuance marked with authenticity and an underlying humorous streak. With the precision of an insightful observer, the artist recreates the subtle gestures of his subjects, capturing their essence and personality. As a result, some of the pieces function as “species portraits”, representing, in general, the most salient character traits of that kind of animal. 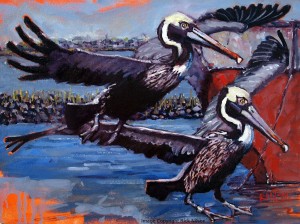 Painting birds can be difficult due to the mercurial nature of the beast: constantly on the move, feeding, flying, or courting; even the larger specimens, when deliberately static, appear tense and ready to take wing.

The artist’s attention to the motivation of his subjects, combined with an understanding of their anatomy and unique locomotion, allows him to negotiate these complications, and render a convincing image that’s at once painterly and iconic. 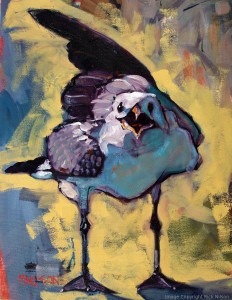 A display of aggression (above), where the bird is shown exerting its entire mass to issue a message of warning, epitomizes Rick Nilson’s style. The creature’s fearlessness, channeled via pictorial veracity, draws the attention and fascinates, as any good nature portrait should.

By picturing the avian models from such close proximity (as if suggesting a face-off between the audience and the subjects), the artist both cancels and emphasizes the differences between the human spectators and the birds. We are close to them, yet are so different. The incompatibility can be a rich ground for comic effect; the compatibility – a reflection on the unity of nature and the humans’ part in it. 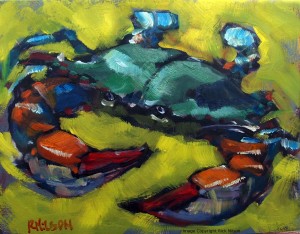 Another common theme in the artist’s repertory is the crab. A pronouncedly symmetrical animal, the crab can be compositionally challenging to paint; to avoid repetition and rigidity the painter positions the crabs askew, and adjusts the viewing angles to convey a sense of mass and presence. 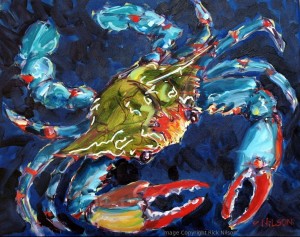 Diagonals are not the only device employed to signal movement. Thick, rich, smeared strokes of vibrant color impart a sense of motion and progression through water and sand. The inconstant, varied texture of the brushwork, combined with the seemingly random scattering of color, becomes a powerful method of light representation. Where this quality peaks, the style of the paintings approximates impressionism. 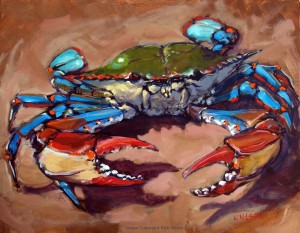 The abundance of light – obvious to a painter living so close to a large body of water, a natural mirror and refractor of the sun’s rays – shows the environment at its busiest, liveliest moments. Using a brilliant white tone, Rick Nilson sprays light over everything, flooding the paintings with spontaneous, seemingly infinite energy. The animals materialize within that flux, restating life at its most immediate and invigorating.