Alvin Richard (visit his website and blog) is a Canadian self taught artist who paints still life, urban and outdoor scenes with exuberant optimism and such an unflinching energy and directness as to unveil before the viewer a bonanza of life’s sparkling possibilities. As a skillful photorealist, he renders transparent and metallic objects with meticulous accuracy — but they are rarely the focus of his paintings. To produce multi-layered, sometimes labyrinth compositions he assembles areas of color, arranging them in geometrically complex structures, not without a hint of the abstract. Light shines through these transformations as the unifying force that binds all elements together into pulsating and vibrant works of art, such as these florals 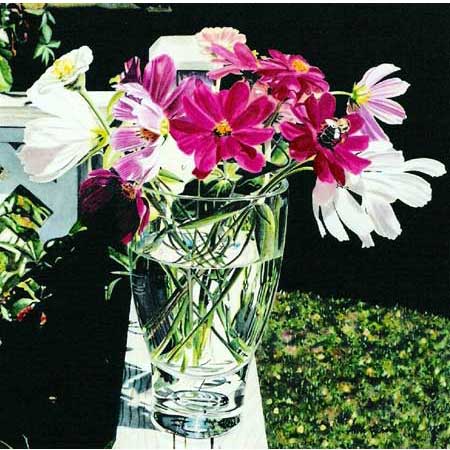 Light splashes the flowers, filling every millimeter, where it lands, to the brim. It seems as though they receive a second life, and, in a way, compromise the constraints of their “morte” situation, and of genre itself. And that, in this case, is a good thing. There is not a trace of a compromise, however, in the general palette scheme: the deep black backdrop and the intensely lit zones generate an almost palpable tension. As a consequence, the illusion of the third dimension receives a supernatural impulse. My guess is that the time of day in these (two) pieces is noon; light can be uncomfortably blinding and migraine inducing, aggressively accentuating every contrast. It takes the delicacy of the petals and the green softness of the stems, which consume the light, to counter that effect.

Thus the flowers soften the initial shock — they could be compared to the aftereffect of colorful patterns we see when closing our eyes after being blinded with a sudden beam. With eyes “reopened” we are confronted with a bright blossom — the artist is careful to define a robust focal point which draws the viewer back into the painting. It is then when the compositions gradually reveal themselves: a corner of a white fence, a patch of grass, a brilliant glass surface, a window frame and, of course, the vases. Some of these objects and surfaces contain and conceal more objects and more surfaces. A bee on a flower. Another window behind the window… Looking at Alvin’s paintings is a process, and it is marked with discoveries. 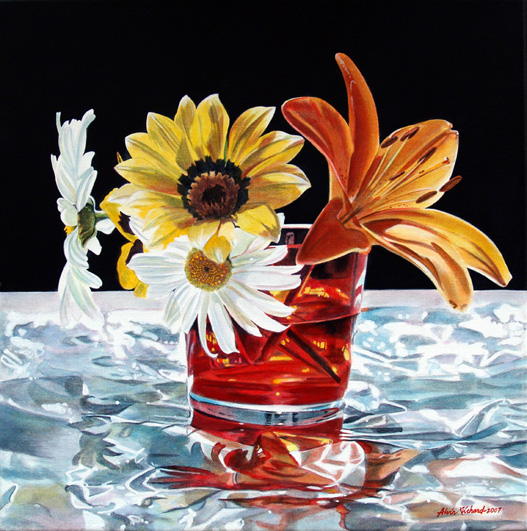 Eventually, the generosity of light, find detail and the compositional diversity mould that optimistic and uplifting spirit that, if I may say so, becomes the moral backbone of the artist’s style. Some of his other paintings include people, particularly children; youth and the willful urge for discovery find their way into still life as well. Within that context, the division of space into layers and separate areas of color may serve as an allegory for future and the steps taken towards it. We all live through dark streaks, but it is the bright ones that make the whole experience worthwhile, the artist reminds us.

One Response to “Alvin Richard: Florals”