These are very similar in style to children’s illustrations. There is one major difference, however: kids here don’t smile as explicitly and are a little older. In fact, the quiet and, as you may see from the images here, intentionally serene characters are almost the opposite of the rambunctious crowds playing and interacting in the children’s illustrations. Most of the editorial and advertising images include a single human actor, presenting either a product or a concept; it is mostly girls, of indeterminate age (I tend to think of them as teenagers — but that could be the work of my fantasy), who exhibit a more focused and serious behavior. They appeal to adults among others; they demonstrate some gravitas. 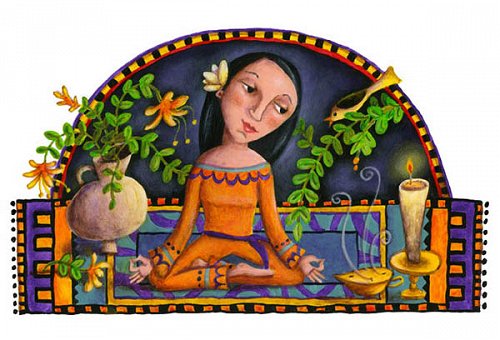 Which, considering the style, may not be that simple. The contemplative expressions have to counterbalance playful and imaginative stylistic features, such as lack of a backdrop, schematic and highly simplified drawing of most animals (just compare the cats in the illustrations with the cats in realist oil paintings – the discrepancy is no less than startling). The list continues: grotesque body parts, distorted perspectives and irrational angles assigned to almost everything big enough to get noticed at the first glance. I think that for that counter effect the artist borrows facial expressions from the Spanish tradition — from the Majas “who never smile.” 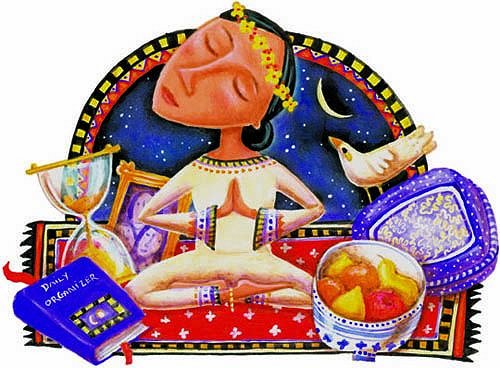 This may sound far fetched, but there are many curious similarities. The girls are brunettes, just as Francisco de Goya‘s famous portraits: that of Tadea Arias de Enríquez, of the Marchioness of Villafranca, of the clothed Maja (and the naked), the Marchioness of Santa Cruz (all hanging in Museo Nacional del Prado, Madrid) and so on.

Cindy Revell’s models do not smile, and bear the mark of self-abandonment, the result of their “activities” of sleep or meditation. Most of the mentioned ladies also appear engrossed in thought, apparently about themes the attributes of which appear beside them: a lute to symbolize music, a palette and a portrait to allude to painting. There is a common air of independence and self-sufficiency. 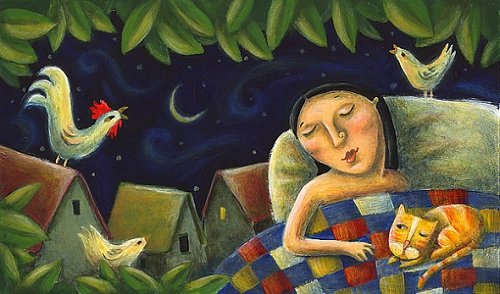 I think that these two qualities underlie that product (healthy soft drinks) or that concept mentioned earlier. Both herbal tea and meditation help to take care of one’s body; having the choice to use them denotes control, which in turn denotes emancipation and freedom… I should stop though, before this review sounds too much like a copy.