Exuberant colors again convey the exotic, tropical climate of Hawaii. In a way the roosters are not dissimilar to the flowers. Both display expressed decorative elements; the petals’ shape resembles the combs’ and the tails’. But there is a fundamental difference between the two: the flowers are passive and languorous whereas the roosters look aggressive and lively. If color movement in the floral pieces was more or less limited to a steady, constant and vibrant shimmer, here the painterly effect assumes the explosive power of a sudden attack — a real one, as far as some of the cocky subjects are willing to demonstrate. 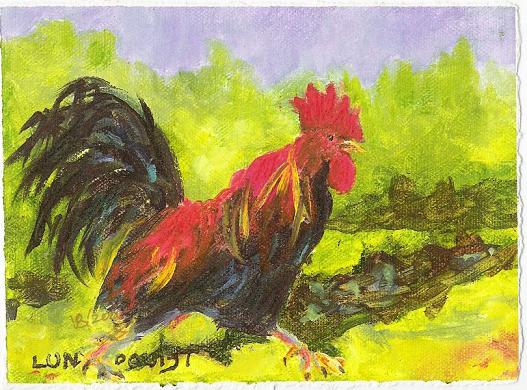 The sharp color variations of the birds’ plumage both defines and accentuates the difference. The red and orange clash with the black, white and green, generating bright, discordant harmonies that engross one’s attention. Sometimes it may seem that the roosters were the artist’s excuse to experiment with wild color combinations — like parrots would seem nature’s to experiment with grotesque decorative designs. I think that these roosters’ flashy coloration breaks down the prejudice of a boring gray domesticated bird. With the artist’s help, they restore some dignity, which makes them equals among such show-offs as said parrots or even peacocks. 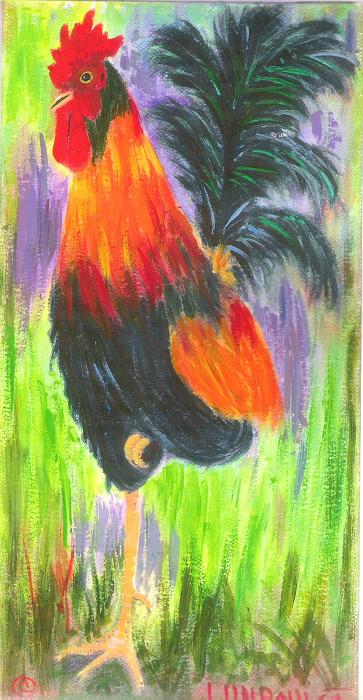 It is easy to recognize characteristic gestures: one is evidently in an attacking/advancing mode while the other is singing. The artist makes her subjects interesting and endearing not only for their plumage but also for their demeanor. The proud postures reveal fearlessness and the readiness to engage in a fight: I don’t know if some of the depicted breeds are of the fighting kind, but it is easy to imagine them as such. It takes only a few long, curving and strong contour lines to condense the birds’ character — a linear economy that makes sense in the overall painterly context. 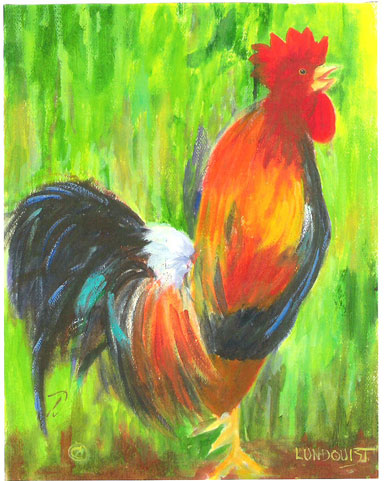 Line is not the only element to be reduced to formal simplicity: undemanding symmetry and balance make up the bulk of the compositional conception. The artist skillfully positions the cocks near a tree, or counterpoises the head with the tail. I find the results delightful: while in terms of symmetry the left side mirrors the right side, in terms of color they produce a poignant contrast. It can be that this coexistence of balance and imbalance reflects the rooster’s lazy alpha behavior — I would certainly pay more attention now, when I see one.