Deborah Paris is an American landscape painter, working in oil and pastel. You will find many digital reproductions of her canvases on her website; latest pieces are being exhibited on her blog. Deborah Paris is represented by several galleries, Ernest Fuller Fine Art (artist bio page) being one of them.

The artist works in a variety of settings, evidently aiming at diversity, and avoiding the common pitfalls of genre painting. She does not repeat herself, but quotes; does not stand still thematically, but seeks new challenges. As a result, her oeuvre presents a rich and thorough monograph on the local landscape. For this review I have chosen the several autumnal dusky works that could, when combined, constitute a series. I like these because the brush records pristine air and evokes a tenderness of mood, with a dash of sadness. The colors compose a visual adagio that sneaks up upon the audience, softly lulling it into an evening, eyes-half-closed phase. 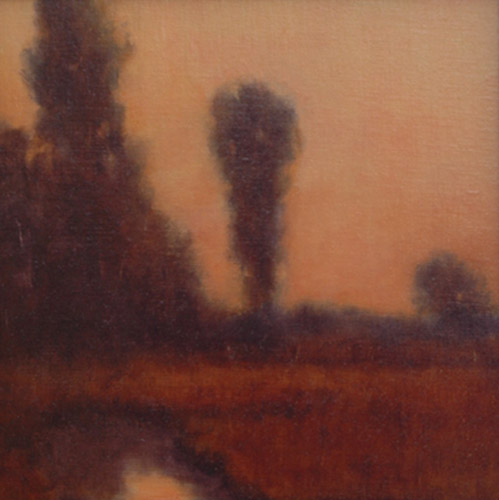 Elevated solids effortlessly transpose into a gaseous state, projecting a sense of fluidity; the boundaries of tree crowns are often degraded and unclear. I think this quality encourages mystical associations: dusk, as a transition from day to night, may symbolize the passage from reality to an alternative reality. In a way, such viewing would designate the artist as an alchemist, or a sorceress who accompanies the viewer. Sophisticated use of bordering colors (pink, orange and purple of the sky lit by the descending sun), value exploration and experimentation point to a convincing mastery of the medium (pun intended). Perhaps in a slightly bizarre consequence — of using the spell of oil palette — the oils acquire some pastel traits and vice versa. 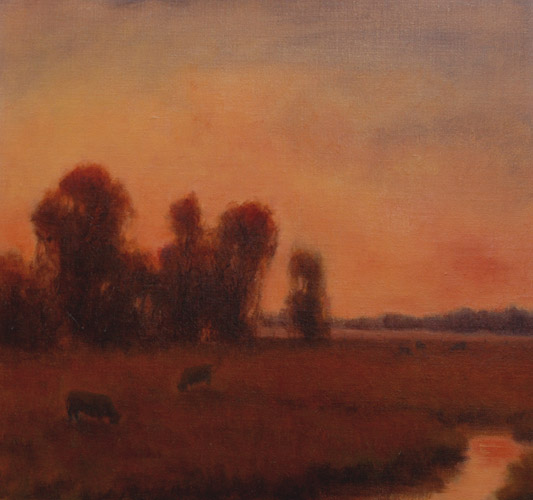 In order to deal with space, the artist introduces oblong visual motifs. I mentioned the trees; winding perspectives are imparted by a concurrent thick line — a river, a path, a coastline, a horizon line, a shrubbery or even a prolonged shadow or glare. As we lower our eyes, the moody atmosphere clashes with the earthly perspectives and ground planes, generating a contradictory duality contained within the frame by the canvas, as if by force. As a consequence of this tense confinement, yet another color variation covers the ground in a way of energy discharge — and the land glows, offering an alternative local cause of the reddening ambiance. Somehow the setting sun itself becomes almost irrelevant, as the scene before us grows more self-contained and self-explanatory. 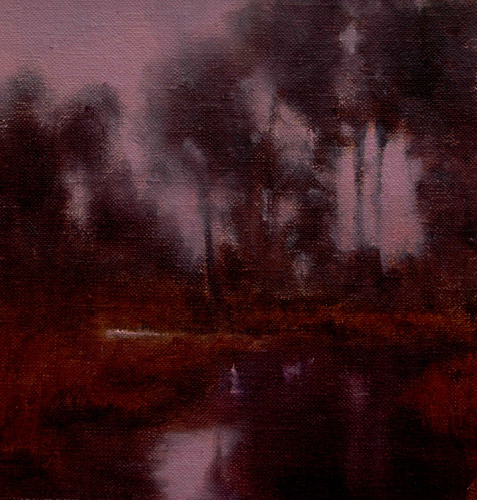 Ultimately, the artist’s adoption of this duality attests not only to the ability to stand on a notional edge, but also to the capacity to translate the tense equilibrium into pictorial terms — all within the subtle general framework of light withdrawal. And personally, I suspect that we are being presented with a softened, mellowed version of a compound that has been through some high temperature points.