Having little to no knowledge of the technical side of painting snow, I would guess that the substance poses at least two creative problems. First, white seems counter-intuitive and restrictive in terms of main palette choice — just by being a “colorless” color. When covering wide spaces, white may confuse, possibly repel the viewer; negative space becomes exaggeratedly such, complicating visual comprehension. Second is the color’s (and snow’s) inherent susceptibility to the influence of other hues: it presents a clean slate that any other color can contaminate. Therefore, snow asks for special care and consideration, adding another sensitive variable to the artist’s set of existent challenges. So let’s examine how she copes with these two. 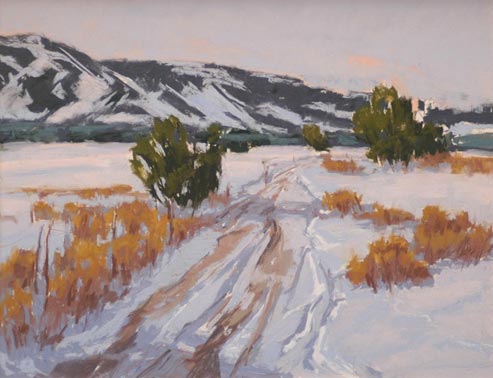 I think that the first problem is being effectively dealt with with the assistance of rhythms created by objects rising above the surface. This is a lateral solution: the initial surprise from seeing the white is still there, but the audience is not given the time to process this first impression into a negative connotation (for instance of cold, or alienation), as the artist draws us into the view by a series of rhythmic diversions, generated by bushes and trees. The paths, originating from the lowest part of the canvas, invite narrational cooperation, and quite forcefully — we are to take the path, either by foot or skis. Consisting of several parallel lines, they also create a rhythmical net (not unlike a tennis net, cutting the court in half) that diverts from the general “coldness.” 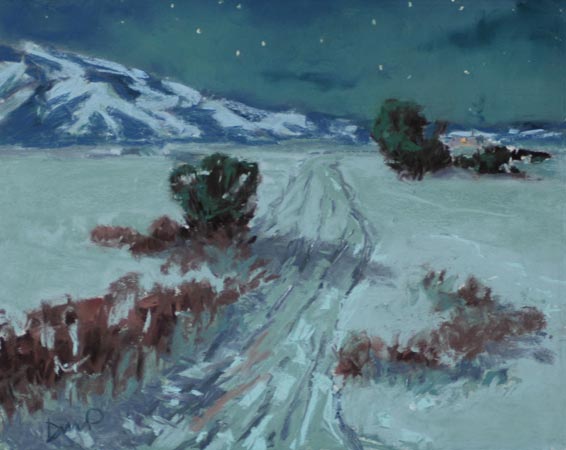 Color solves the second problem — “treat the malady with its cause”. The scanty growth around the paths boasts some color, however pale. Moreover, a closer inspection reveals that the snow is far from white: it is covered in thin layers of gray, blue, and even orange, reflecting the sky and the light. But yes, it takes an effort to notice these; perhaps it resembles the one made to adjust to a season change. It is possible that people who rarely encounter snow would have some advantage, being less optically desensitized. I personally haven’t seen real snow in 18 years — which may just give me the needed edge. 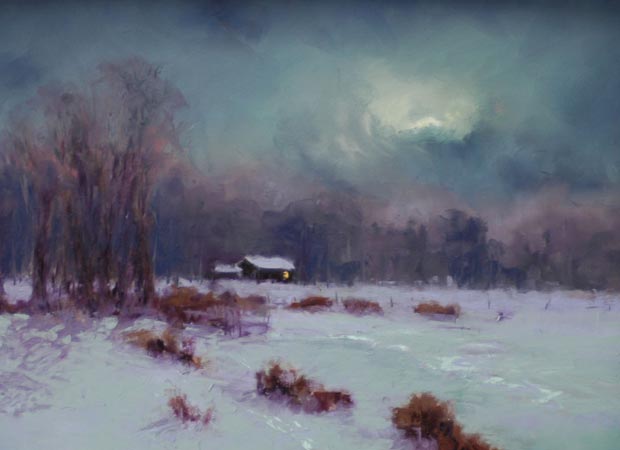 Finally, I would like to bring to your attention the abstract quotes on the mountains in the background. The range actually constitutes a remote and somewhat irregular canvas on which nature paints with snow. White and gray stripes and blots produce powerful abstract images, invoking such “winter” emotions as loneliness and abandonment. The artist pays tribute to nature and its artistic streak; she expresses gratitude in what may seem like a private exchange, warm enough to melt not only the snow, but the viewers’ hearts as well.