The still life pieces allow to make a more round evaluation of the artist’s style. They are less dramatic; they are calmer. The inherent stillness brings in an air of objectivity and provides a respite from the intensity of human figure. The often unusual viewing angles, which may seem unnerving and disquieting at the first glance, do precisely the opposite: because the view from above captures maximum detail, they reduce uncertainty, hiding less, and relax. The combined profile and en face depiction of the garlic (ironically reminiscent of police bringing photographs), for instance, repeats the portrait trend, but exerts an opposite effect, as the viewer is being reminded that a garlic is a garlic is garlic, from any perspective. 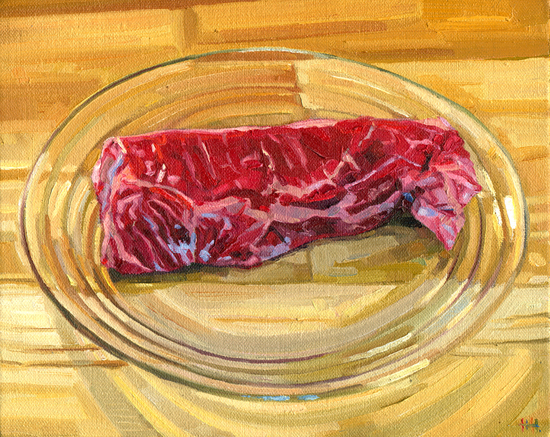 The light and the air (made almost palpable by the broken color technique) added density and depth to the models in the portraits; here they infuse the subjects, letting them breathe, and “open them up” in way, similar to the term oenophiles use. This is exactly what ingredients need: the air carries their aroma while light shapes their familiar form — the viewer is being reminded of the subjects’ role as food. The artist conditioned the audience to respond seriously to her portraits (via a collection of psychological impressions); it appears that here she tries to veer the discourse into a lighter direction. It makes sense, because portraying smiling and joyous people, for example, wouldn’t have done the trick; but a shift to a different genre would, and to my mind it does. 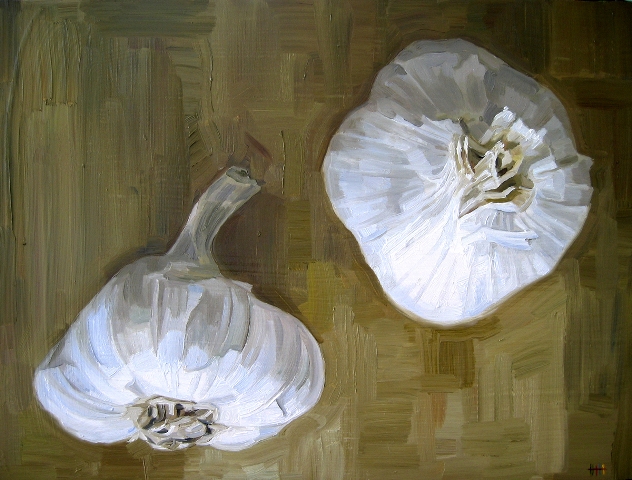 I like the solid and confident compositions. Perhaps even overconfident: it’s as if the brush compensates for the intense effort of painting layers upon compositional layers by lavishing all the hard-won experience upon a simpler theme, just to feel easy and light. As a result, I get the impression that the subjects are being toyed with, maybe even slightly ridiculed. The artist paints the meat and the vegetables as a chef would handle them. And both know where they would eventually end up. And we know, too. 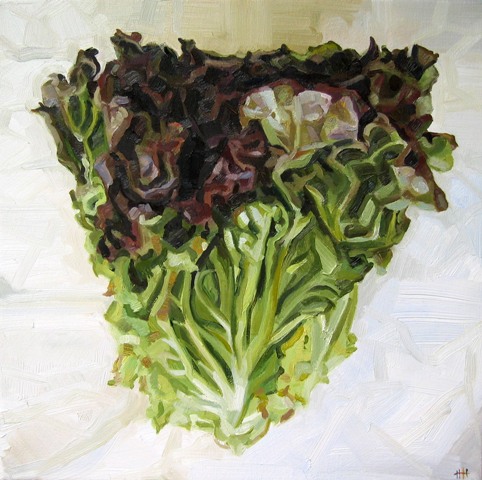 In other words, the still life may act as a valve that lets out the steam of the mental strain resulting from an imaginary exchange between the viewer and the people on the portraits. For some it may appear as a comic break, for others a different kind of diversion. Either way, the artist’s venture into the genre could be read (once again) as the will to take responsibility for the entire creative output — the ensuing versatility putting the final embellishing stroke.