The idea of time and moment’s fluidity takes on a somewhat playful twist in the chocolate series, where direct and planned human activity (in making the chocolates as well as in every step of consuming them) substitutes the unpredictability of nature’s process. Still, a surprising parallel may be drawn between the man made bonbons and the flowers: seeing the chocolates in their wrappers may remind of the ripening period; removing the foil and presenting the sweets in their glory associates with reaping the harvest, while it’s in the height of its bloom; finally, gorging on the artificial fruits resembles smelling the flowers, and, in an ironically reverse twist — looking at them. 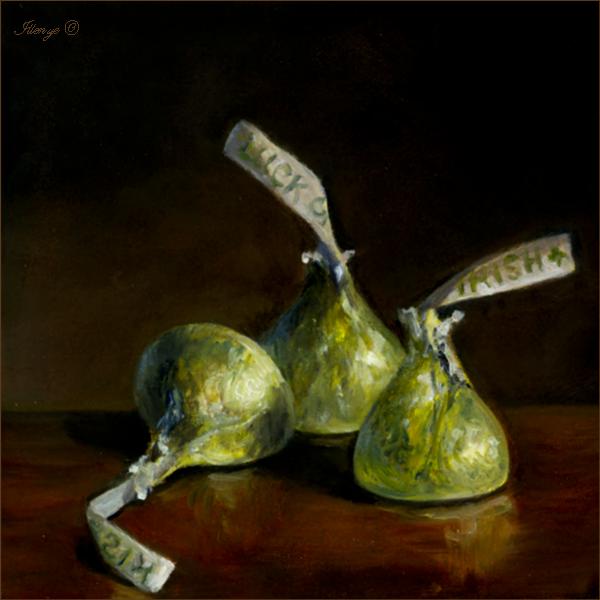 Thus, growing, blooming and withering suggest an artificial analogue, also a three step process, all performed by the consumer. They evolve (or devolve) into a series of controlled and timed operations. I don’t know why exactly, but this comparison, though telling, seems somehow humorous — maybe its the chocolates that evoke the comical effect, or maybe just the imitation. But perhaps there is a deeper meaning to be found in the notion of human taking over: painting is also an artificial undertaking, where objects become subjected to the artist’s will and conception; transferring to canvas the products of industry rather than of nature makes a strong logical sense. Historically speaking, new industries ask for different artistic approaches and the subsequent development and branching of the genre. 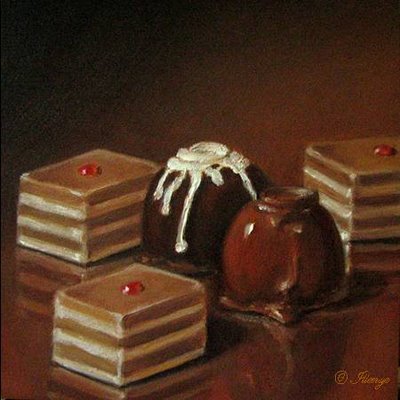 Artistic logic is similarly visible in the choice of background color: deep brown reiterates the hue of the chocolate, while the bright lilac that of the filling. The totality of repetition calls up the richness of the flavor, seeking to allude to taste through color. In a delicious turn, the taste doesn’t retrace to the same palette: in my mind, the flavor of the sweet stuff transcends into silver sparks and stars, and bright blue swirls, all on a background of golden foil — the artist avoids monotony through the power of individual association. In a way, the painter capitalizes on our past experiences, aiming at them, and making the paintings a kind of a subconscious conduit to previous tastings. 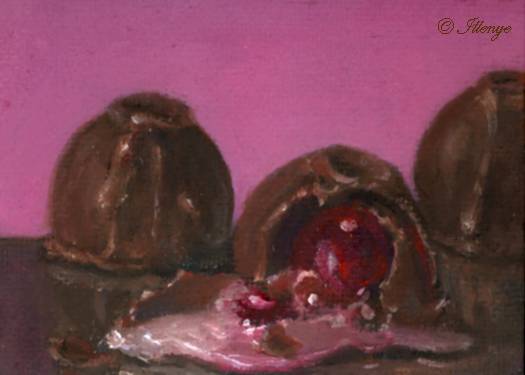 Chocolate is a known afrodisiac, and the above painting conveys that quality in a most subtle, or straightforward — depending on the viewer — manner. The bitten, half melted bonbon implies the tasting of a fruit of a different kind, and the tempting berry inside may prompt to extend the metaphor even further (the chocolate compartment indeed appears to guard it from some impatient sweet tooth). The reddish tones may suggest blushing or the rushing of blood to other body parts… Anyway, we sometimes tend to associate red and its varieties with sexual thoughts and actions. I think that the general warm atmosphere encourages erotic fantasies — after all, it is in our blood, which, as it happens, is also red.