I like these paintings for their promises of numerous pleasures. Yes, there is the basic familiar satisfaction in watching still life unfold on the panel, — pleasure of the aesthetic kind, simply put, the one which every art lover grows to appreciate with time. However, here its edge dulls somewhat in the presence of the other delights. The first one is that of botanical exploration and discovery: depictions of an inside section of the vegetable and the fruit echoes methodical illustrations from scientific periodicals and publications. The second one is of a culinary sort, namely the recognition of the subjects as potential ingredients. It seems as though the knife that split those figs and artichokes has also divided our attention between those additional layers of visual interpretation and association. 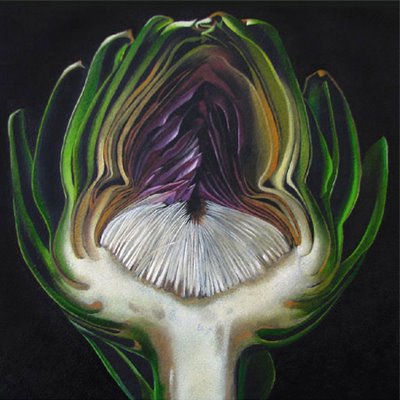 Interesting reiteration may be traced in the bisected fruits: both display a cross section that reveals a telescopic, and somewhat kaleidoscopic pattern that appears to suck the viewer in — where to exactly is unclear, but the black center of the pattern may allude to the eponymous cosmic phenomena, and their destructive forces. I doubt the artist has counted on the sinister effect; the dark end of the tunnel may conceptually (and not without some humor) imply the finishing line of consuming the product — “it was nice while it lasted, it’s over, back to normal now.” This reminds me of the known phrase, “the hole of the bagel”, which means “nothing.” The hole of the artichoke and the hole of the fig seem just as empty and devoid of edible substance… now that’s just not fair! 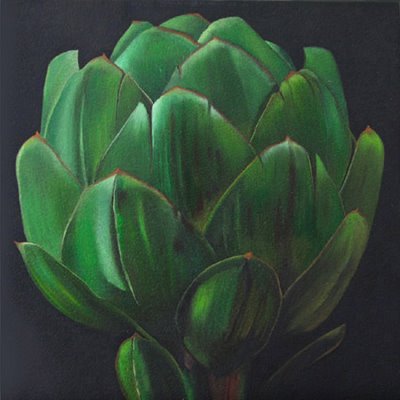 Complex color modulations offset unassuming compositions. For instance, the whole artichoke boasts several varieties of green, usually achieved by adding white or black to the main tone. The cut version startles and rivets with contrasting color interplay, yellow enveloping the purple, two opposite colors on the wheel. The white of the stem and the innards acts as a neutral, and somehow abstract force of nature; it threatens to burst out into the beholder’s face and to blind, as the expanding feature of white intensifies the air. Indeed, the whole set-up resembles an atomic explosion (or a big bang, to align the metaphors) recalling the violent “end” of the vegetable on the one hand, and the enormous amount of energy that its growth expends on the other. The artist constructs a visual allegory of the agricultural process by color organization (and choice of composition). 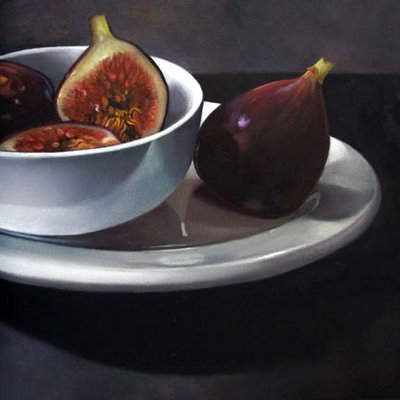 The nonchalant arrangement of the figs subtly arouses one’s gustatory sense; the straightforward artichoke does the same thing — they succeed because they hardly seem to try. Naturalist fascination with patterns, geometrical and colorful, gradually transcends into an aesthetic admiration. Powerful palette and simple symmetric compositions secure the latter. But perhaps the most accurate observation that could be made about these pieces is that they keep their promises.

One Response to “M Collier: Still Life with Artichokes; with Figs”