Although these obsolete mechanisms were designed for purposes that to some may seem opposing — a conversation with oneself (and the audience) when using the typewriter and a conversation with a different person while talking on a phone — they were both, nevertheless, used as a means of communication. Circles embody that kinship, the geometrical figure being a prevalent visual motif in both pieces. The small circles in both instruments include letters; to be touched and pressed by our fingertips, they point to language as the real communication cord that links us together and allows the exchange of information. In a way, the ostensibly highlighted form in which the letters appear on or below the moving parts of the devices reminds of the progress that language allowed us, as a species, to make. These paintings, depicting tools no longer in use, but once representing that progress, prompt to evaluate the transient nature of technology, and it’s ultimate debt to language, either written or spoken. 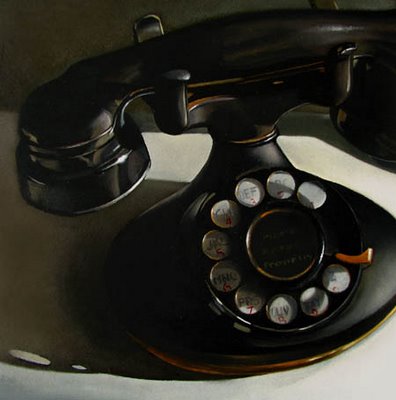 The artist’s choices of angle, lighting and compositional methods direct the viewer to ruminate over more personal and intimate associations. Both of the apparatuses were approached from a rather high angle, as if sneaked upon: that way the artist simulates a quiet intrusion; in a way the viewer is being allowed in medias res of a past telephone conversation, or a writing session. The sheer physical proximity of the instruments disorientates the viewer, forcing to seek an anchor in the form of a compositional hand-rail (not necessarily the focal point). The telephone receiver, a handle in quite a literal way, may serve as such a stabilizer in the piece above, whereas the question mark upon a metallic pole — the two together forming a bar chair — would support the “dizzy” beholder of the painting below. Cropping of principal objects emphasizes their role as supporting tools, as  a partial rendering alludes to the limited mechanical part the tools play. Eventually they serve the people, they are mere automatons. 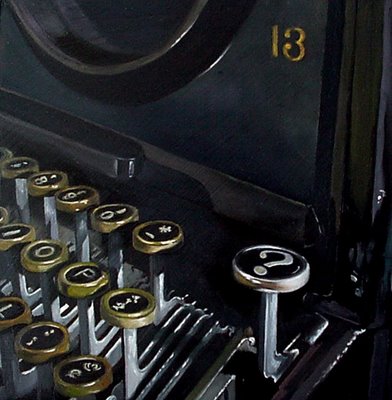 Perhaps the artist anticipates and ironizes overzealous fascination with technology. In my understanding of these pieces, the interplay of language and its parts with the cumbersome machines that contain it, or even enclose it, reinvigorates the dispute of humanities versus technology, and which will bring the progress we may have gotten accustomed to expect. In a way, the temporality of the devices underscores the vigor of technological progress. Some machines die — new ones appear. We do not see, however, the new generation depicted, it is but implied. It is the letters, either black on white or white on black, vivid and always relevant, that remain active as the only working and still usable components in these devices; words, unlike machines, will never fail those who use them — regardless even of time itself.