This series enthrall me for what seems like an intentional obstruction and defocussing. Some of the grand pianos appear to float on a floor of haze, others are about to sink in waves of light. Either way, air and light, made conspicuously visible, act as a kind of a plate that presents the main dish, the musical instrument itself. And that basically means, to mix the metaphors, that the music is intended to be consumed with the atmosphere. Furthermore, by contrasting hard surfaces (such as the black lid) with volatile substances, the artist intensifies the illusion of space, and of a three dimensional setting in general. The paintings shroud the audience in a cloud of mist; rhythm — or painterly music — keeps the viewers occupied in the process. 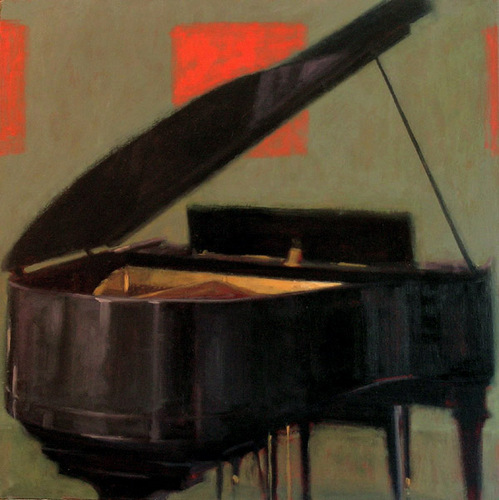 Another feature that struck me was the allusion to Kazimir Malevich and his suprematist works, especially the earlier ones, those with less figures and lines. (I should say that I am big fan of Suprematism and consider it one of the most fascinating of abstract styles). Sandra Flood appears to quote the Russian master in some of the busiest parts of her pieces; the allusion adds humor and a whiff of abstract uncertainty, which correlates nicely with the general semi-surreal scenery. Before we discuss the specifics, I want to add that one of the effects of this stylistic echo, at least for me, is a retro mood that permeates the entire series, as if dipping the artwork in the early twentieth century sauce: thick, decadent and modernist. 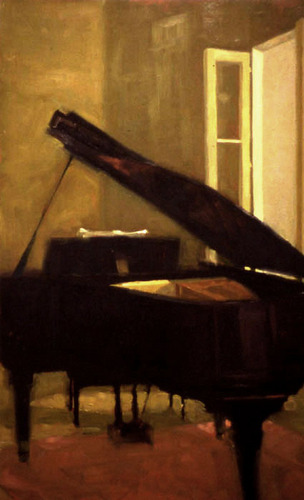 In two of the paintings we see how red squares (paintings, according to the title — an ironic touch) combine with the black lids of the pianos, creating familiar patterns of lines and geometrical forms. Here the artist delves into a complex meta-artistic discourse, as sometimes it may appear that the lid is indeed a continuation of the painting on the wall; the hazy atmosphere plays the practical role of obscuring matters and tempting the viewer into this illusion. To think about it, such a turn of events is not surprising at all: these paintings are about art, and it makes sense that music would intersperse with painting. Both rely on rhythm and the artist restates that notion — without a single false note. 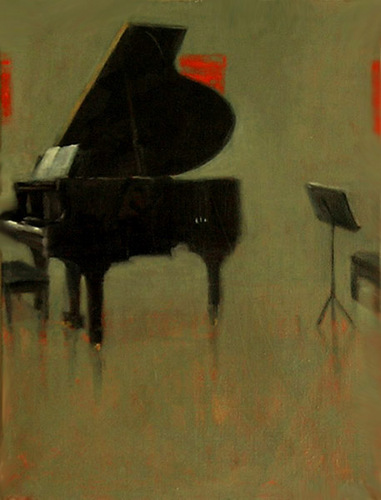 The piece where the grand piano is positioned near a window stands slightly apart in terms of style and atmosphere. It is more impressionistic than surreal or abstract — the warm, golden light dominates the hall. It’s a brooding and romantic piece that appeals directly to the audience’s emotions. In other words, it adds a more human, non-calculated (non-geometrical) side to the series, rendering them more complete and multifarious, stylistically as well as psychologically.