Several of Stephen Magsig’s trademark stylistic features contribute to a succinct yet expressive image: juncture viewpoint, strong juxtaposition of light and shadow, spacious monochrome patches. Themes also recur — apparently abandoned industrial buildings, empty streets in broad daylight — the principal subject always being the city of Detroit, and its decline. Various compositional echoes (the chimney, the bridge-like entablature crossing the canvas at its center) allow to view this piece as a pastiche of such works as the Nocturne in Blue&Gray and the Midtown Warehouse.

Envisaged as a part of a series, the painting stands out for its overpowering, almost brutal display of concrete or brick-made mass. In a curious overturn, the artist’s direct “attack” method has backfired: the building, it seems, is ready to attack back. Possible symbolism aside,  nowhere before in Stephen Magsig’s work have the crumbling structures of Detroit appeared so dangerously close to the viewer, so dangerously close to collapse. The sensation of an overwhelming, intimidating cliff, aided by the low vantage point, becomes even more intensified by the strong red colors. 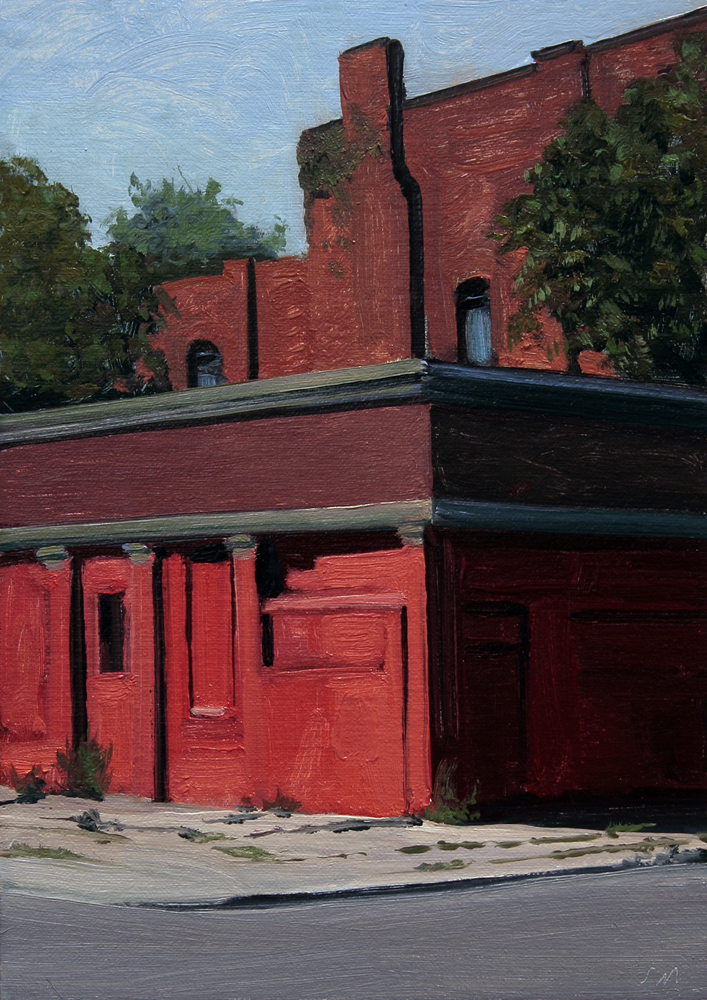 Colors are scarce but expressive. The red spreads all over the canvas in different values; from blazing scarlet at where the light falls directly, it transforms to nearly black in deep shadow, and to shades of brown at the top stories, where the light is filtered by the tree tops. Areas of sky blue and green embrace and cushion the top floor, containing somewhat the heat emanating from below. Neutral asphalt gray performs a similar function at the bottom of the painting.

The red monochromatic swathes convey the scene’s strong industrial flavor: manufacturing work is often monotonous, dull, repetitive. “Dirty,” chaotic brushwork on the walls adds an element of raggedness and almost palpable realism, lending more depth to the overall sensation of a production mill. Extreme economy of composition — there is nothing to divert the eye from the building except a few grass sprouts — directly confronts the viewers with these effects. It is a harsh, uncompromising vision. 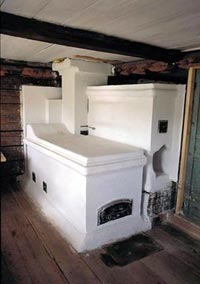 On a different note, I would like to digress and direct your attention to interesting similarities between the Detroit structure and a traditional Russian oven-bed. The oven-bed was once indispensable to the Russian peasant way of life, tumbling its way into many popular folk tales. In these tales, the oven can talk, move around and save Ivan the fool from various troubles…

Russian people loved it and glorified it for its universal qualities: it served as a resting place, it provided the people with bread and it warmed the hut — the ultimate source of life and leisure. In the image above the oven appears painted in neutral, soothing white, an antipode to the intensity of “Downtown Red.”

*this article has been edited at a later date