These winter landscapes, similarly to the river paintings, are marked with calm that seems to emanate from inner, deeper resources. If the latter encouraged to envision underwater currents, the former appear to conceal sources of quiet energy under the ground — or under the snow, as if in hibernation. I think that this impalpable illusion is the result of the effortless transformation of color harmony into clear, breathing atmosphere. There are few colors here: white, pale brown, pale blue and some shades of black; the general low to neutral temperature of the palette correlates with the season the colors depict. The white snow binds the blues and the browns as an intermediary that simultaneously plays the part of the dominant color. The overall harmony and economy create that special mood of stillness, which lies in wait for the viewers, to pass on some of that hidden energy. 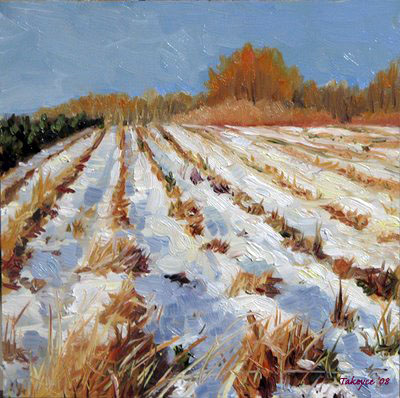 A secondary, but important motif is that of sleep. The arrangement of grass islands, randomly or neatly interspersed among the snow, reminds of bed linen patterns, while the white associates with down that fills pillows and the light brown of the grass links directly to straw that fills mattresses. The cold winter weather is known to paralyze and put to sleep a casual wanderer. Could it be that said hidden resources contain some darker, hypnotic powers? Could a conflict seethe under the sheet of snow? Possibly so — but the surfaces do not reveal anything; all we see is the weak light reflected off the ice crust. However, if there are indeed some primitive forgotten instincts that allow people to communicate with nature on a different level, the artist captured their essence in these landscapes. 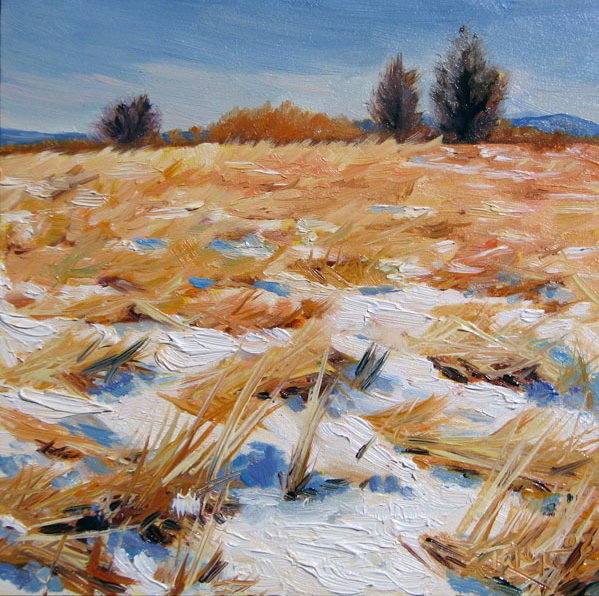 Composition-wise, these works again resemble the river pieces. Due to the low viewing angle the ground level fill most of the canvas, which in turn allows to develop long, anticipatory vistas. Human presence is hinted at by the accurately arranged growth — but the snow seems to aim to cancel any sign of the domestic, and human touch remains limited to mentioned instincts. Finally, I think that these pieces, and Takeyce Walter’s work in general are particularly effective at probing into people’s most spontaneous, initial responses to nature and seasonal changes. As such, the landscapes are difficult to write about — they do not render themselves to words easily — because they work on other levels. But that speaks only to their advantage.