These chiaroscuro sculpted toys stand out as miniature totems. Placed upon a pedestal, they soon transcend the connotation of child’s play, crossing the boundaries of amusement to the much more serious realm of (animal) worship. That is a provocation: is the transition possible without the violation of a spiritual sentiment? Perhaps it is — native Americans, who were known to sanctify various fauna, were often considered naive, credulous and psychologically uncomplicated, all of the qualities that make children so charming. The artist’s choice to depict strictly domesticated animals comfortably returns us to a more customary setting, in a way tying the loose thread of hypothetical historical time travel. 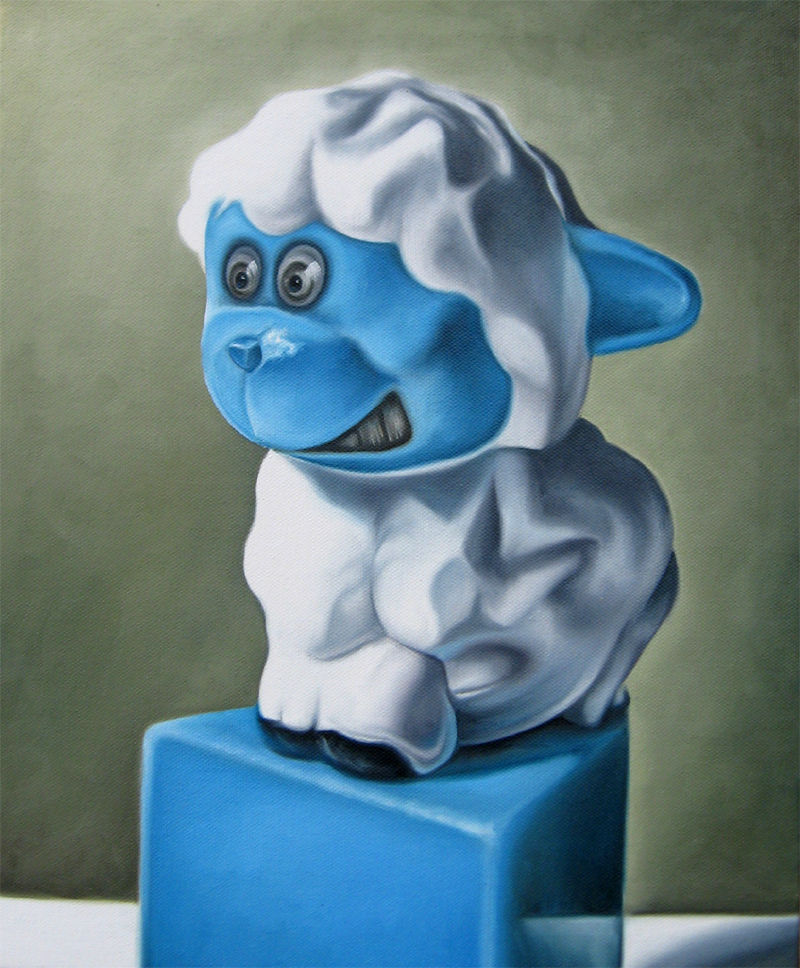 Although in terms of color the cool and neutral backgrounds complement the deep blue, orange or pink, spatially they push the objects towards the viewer, as if rejecting them. The indifference of the walls creates a sense of ascetic solitariness, which the animals, lively and expressive, seem to want to defy, or ignore. Perhaps they do not notice it — but we do. The backgrounds appear almost monastic compared to the toys, whose colorful richness echoes loudly in an easy to imagine sanctuary. To complicate things further, it is the walls that carry the halo effect and endow the subjects with another religious attribute. In some ways, palette and space reflect the ideas of the sacred and the secular and how they intersect in our daily lives.

Enough of that serious talk though… There is a totally different aspect to discuss — how the toys resemble digitally animated characters, particularly those created in Pixar studios. The artist dispenses with detail to focus on a few main features on the head and the rest of the body; to compensate, he introduces intricate light effects, which enliven the artificial creatures. Light and shadow break the smoothness of the colored surfaces and complement the personality of each of the characters. Thus, the disorderly waves on the sheep’s fleece harmonize with its rambunctious look, the round flash of light on the pig’s head imitates the snout, while the long, dividing shadow line on the horse’s body replicates the ones on its head and muzzle. 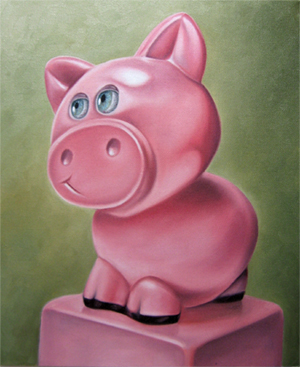 All that said, I find it difficult to settle for either one of the interpretations — but to combine them would be even more difficult. It’s as if those plastic eyes cannot bear a long and intent gaze; the cuteness begins to evaporate, or even change into something sinister — and there is no way back, not without reconsideration. It’s interesting that both the religious viewing and the animation analogy involve imaginative, impalpable ideas. Perhaps this could be the unifying concept. Still, there is a certain tension that remains unresolved, and the provocation still hangs in the air. This, I think, proves that Todd achieves the maximum out of his humble subjects.