I once bought a carton of unusual eggs. They were chicken’s alright — the anomaly went in a different direction: every other time after breaking an egg, I ended up with two yolks in the pan. I have to admit that I felt a slight pang of regret and otherwise inexplicable emotional response at the sight of this memorable phenomenon — hypothetical twins floating in the limpid liquid. After the second occurrence I felt strangely unsure, my hands were trembling and light, I was nervous. “Should I be sorry?” thought I, “And ponder the what-ifs?” I did when I had a whole chicken on Passover last year… Well, for me, these paintings transcend their own visual power to evoke such seemingly trivial memories and perhaps even force a reassessment of them as more meaningful. 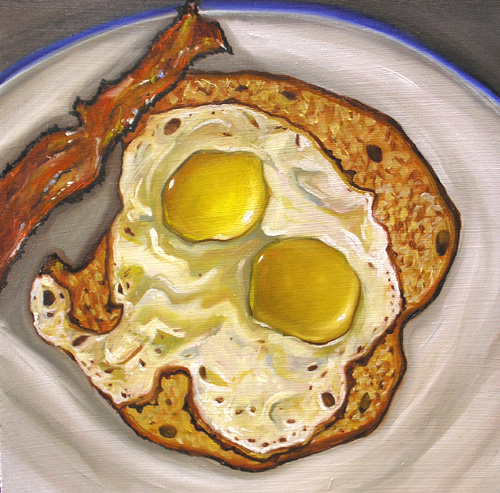 But I’m slightly off track here. These water-mouthing images will make anyone hungry; straightforward replications of hearty breakfasts, they understandably find a responsive audience in the face of restaurant owners and their customers. A series of such paintings would inaugurate a visual food-fest (especially with paintings of other types of food included) and encourage some of us to appreciate the artistic element in cooking and presenting the results. By his work, Vic in a way vouches for gastronomy and the culinary arts, highlighting the entire process as a serious occupation that reaches far beyond the mere satisfaction of a basic need. In other words, in these pieces we witness a dialog of two art forms. 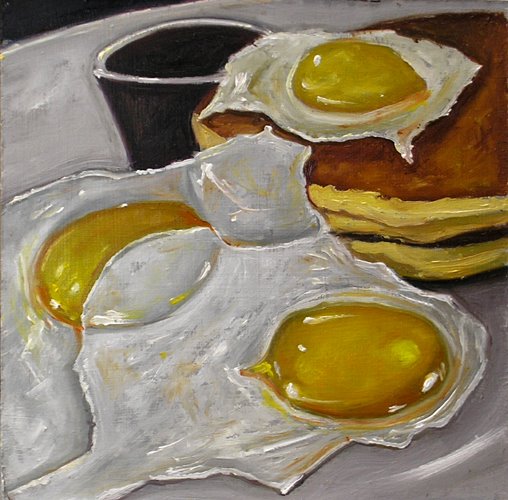 When compared to kitchenware, the still life with food items displays a notable compositional development. The theme calls for a parcelling to smaller and more numerous objects, and a complication of composition inevitably ensues. Retaining unity becomes a more demanding, if not a burning challenge; I think that the artist recognizes and stands up to it gracefully and, which might be even more important, discreetly. He doesn’t aim at radical stylistic overhaul but builds up a generic change by fine tuning, gradually creating an alternative set of painterly principles (involving angle, tint variation and other parameters), perfected for these kinds of subjects. 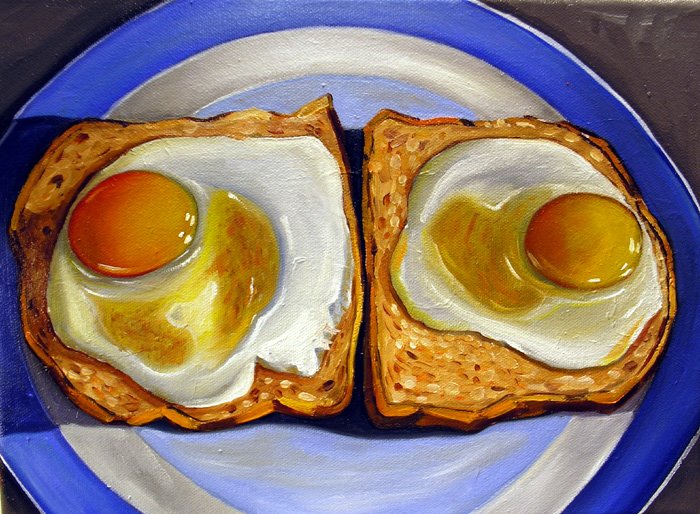 It would be interesting to follow a shift in an opposite direction in the artist’s car paintings, where he concentrates on a single detail of the bigger image. Here I would like to restate that reaching these conclusions would be impossible without browsing Vic’s extensive library of reproductions on his websites. I am very enthusiastic about the benefits of publishing artwork on the Internet and would like to encourage artists to start art blogs. It is never too late. And it is not incidental that Vic’s blogs were named a “studio” and a “gallery” — because it is precisely what they are, allowing an in-depth inquiry into various aspects of his artistic process.